Until relatively recent years, almost all commercial wind turbines had the same type of powertrain features as shown in Pic. 1: The rotor blades are mounted to a cast-iron hub. The hub is mounted onto the drive shaft which passes the nacelle via a rotor bearing into a mechanical gearbox. The gearbox is then coupled to a doubly fed induction generator that creates magnetic field with two sets of electrically-excited windings. In this system there are no permanent magnets. 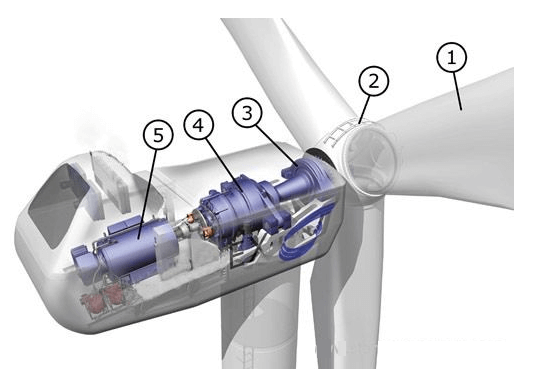 Under normal conditions, the typical rotor speed for a commercial-scale wind turbine locates between 10 and 20rpm, but the doubly fed induction generator requires much higher rpm (at least 750rpm) to operate properly. Therefore the gearbox is applied to convert the low speed of the rotor into the high speed needed by the generator. However, bigger gearboxes may bring more mechanical problems. According to a specific report in 2007, the majority of gearbox failures originate from the bearings. Without regular maintenance and observation, it doesn’t need much time to learn how catastrophic a gearbox failure would be to the turbine system. Various improvements in design were made during recent years but none of them could completely resolve the problems without bring other ones. For this reason during a very long time the wind-electricity conversion rate stayed very low.

These challenges led to a re-think in the structure of the wind turbine power train and in 2005 came out the first commercially-available turbine generator solution.  This new design innovatively conjunct the gearbox with a permanent magnet generator and significantly increased the wind-electricity conversion rate and reliability of the system.

The new set-up reduced the overall weight in the nacelle and required a much lower generator speed of 60-150rpm compared with the doubly fed inductor generator design. In addition, the new design had fewer moving parts to go wrong and required less maintenance.

As you can guess, the following step would be to come up with a design that removes the need for a gearbox altogether, which is exactly the design we use today. The latest couple of years has witnessed the emergence of commercial-scale & direct drive permanent magnet generator systems with the hub directly connected to the generator. The benefit that we get is a system with significantly increased reliability and reduced maintenance costs. Reduced downtime for maintenance also means less non-producing time offline. The elimination of the inevitable associated mechanical losses for gearboxes also leads to improved efficiencies in the power conversion process. The generator itself is also much more robust than conventional systems, and compared to earlier designs, it gives greater efficiencies when wind speeds are not at full rating.